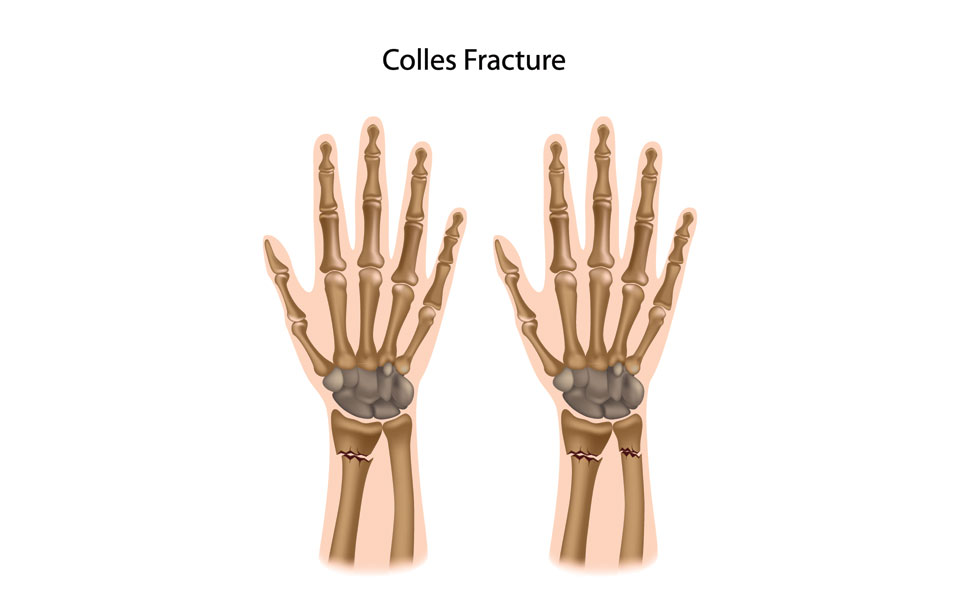 Under the first classification, a Colle’s fracture makes up 90% of all Distal Radius fractures. It is known as a bending fracture. These occur when the patient falls forwards and plants their outstretched hand in front of them. As the patient’s body falls, the transfer of load onto the wrist forces it into supination where it faces forwards or upwards.

The strength and quality of the bone, whether it’s osteopenic – weaker than normal – also plays a significant part.

These fractures can occur during:

Another type of extra articular fracture is a Smith’s fracture. This is a reverse of the Colle’s fracture, where there is volar angulation of the distal fragment. This commonly occurs when the patient falls backwards and plants the outstretched hand behind the body, causing a forced pronation type of injury where the palm faces backwards or downwards.

The signs and symptoms of a distal radius fracture vary depending on the severity and mechanism of the actual injury. It can present with localised pain without oedema (swelling) or deformity, or with a deformity, swelling, and bruising.

Depending on the severity of the fracture and the age of the patient, surgery might be required.

The surgery involves reduction of the fracture and then fixation of the fracture. The most commonly used fixation implants are plates. There are different variations of plates used in surgery and including volar locking plates, low-profile fragment-specific fixation plates, bridging plates, external fixators, and K-wires.

If surgery is not needed, then conservative treatment can be used and includes reduction of the fracture (generally by a doctor in a hospital emergency department) together with a cast or splint to immobilise the wrist for four to six weeks.

Although it is necessary, there are downsides to immobilisation and some negative aspects to using a cast or splint, particularly regarding its effect on soft tissue and bone. Downsides include loss of bone mass, length of muscle, muscle atrophy, ligament weakness, and changes in proprioception (which refers to your ability to sense the position and movement of your wrist).

It’s very important to balance the goal of supporting the joint through splinting to protect the healing fracture with the possible negative effects of immobilisation. To mitigate against the negative aspects associated with splinting, it is highly recommended that controlled protected movement is commenced as soon as it is deemed safe to do so.

Once the fracture is deemed stable enough, hand therapy can commence to help regain movement, strength and wrist functionality. Commencement of therapy largely depends on whether the patient has undergone surgery or not.

Rehab is split into different stages based on the degree of tissue healing. Initially – in both surgically and conservatively treated fractures – tendon gliding exercises are very important. In these exercises, patients are asked to continue to move and glide their fingers. This motion has been shown to reduce stiffness, tendon adhesion formation and also reduce swelling.

Patients who have undergone surgery and have had the facture fixed with a plate can still commence early movement due to the stability the plate provides to the break. There are recent studies to show that patients had better short-term outcomes – less than six months post-surgery – with a volar locking plate and grip strength if mobilisation with exercises is started within two weeks of surgery compared with those that started mobilisation after five weeks.

If the fracture is conservatively managed, formal exercise therapy can commence after the patient’s injury has been immobilised either in a cast or splint and deemed stable.

The initial focus is on restoring the movement in the wrist via active wrist exercises and to begin weaning off the support. These exercises will progress to proprioception, strengthening, stretching and occupational based movements.

The proprioception retaining is often overlooked in distal radius fractures and can often be impaired due to of immobilisation, pain, stiffness, or loss of feedback to the wrist ligaments which may have also been injured alongside the fracture. Some of these exercises involve multidirectional movements/stability or controlling the wrist with perturbations.

Splinting/casting provides external support to the vulnerable fracture in the initial stages of healing. It does that by restricting compressive, rotation and loads/forces at the fracture site.

Casting and splinting are both used in the treatment of distal radius fractures. They each have varying advantages and their use depends on the stability of the fracture and the patient. A thermoplastic splint is custom-made and re-mouldable to allow for changes in swelling and comfort.

A thermoplastic splint is also less likely to cause pressure or skin breakdown. It and can be used after surgery where there has been internal fixation with plates and screws. It also can be used for stable fractures in certain patients as deemed by the medical team. Casting can involve plaster of paris or fibreglass. Fibreglass has the advantage of being waterproof and is used for conservatively treated Distal Radius fractures.

Melbourne Hand Therapy Can Help You

At Melbourne Hand Therapy, our team works closely with your medical team and are able to fabricate either a cast or thermoplastic splint initially for your healing fracture. Once deemed appropriate from your medical team we will assess your movement and function and guide you through a therapy program aiming at restoring your movement, strength and getting you back to doing what you love. 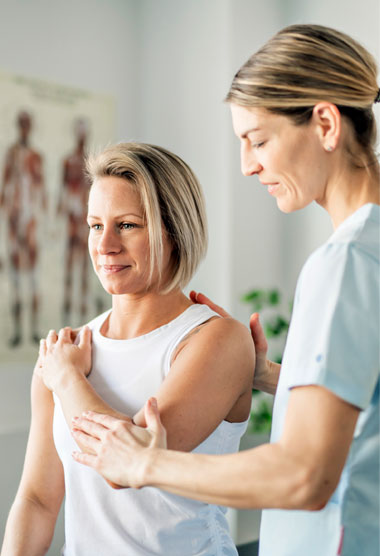 Our goal is to assist you in achieving the best possible outcome following your injury or condition.
Get in touch with one of our therapists today!

Make an appointment Make a call