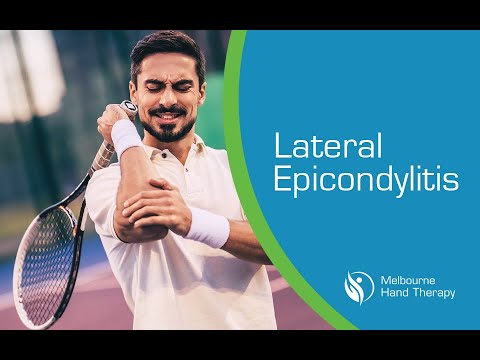 In this article, we will be discussing lateral tendinopathy or tennis elbow. Prior to discussing causes and symptoms it is first important to recap on anatomy.

Next is the ECRB attaching via the CEO, the EDC and finally the ECU.

The ECRB is commonly thought of as most affected, most likely due to its close proximity to both the annular ligament and the LCL meaning there are increased shearing forces on the tendon on forearm rotation movement.

Lateral tendinopathy (tennis elbow) is a common condition that affects 1-3 % within the general population, therefore having a large impact on individuals and society. It is most predominant in middle aged individuals.

A study by Bisset et al published in 2006 has shown that physiotherapy combining elbow mobilisation with exercises has a superior benefit versus a wait and see approach at 6 weeks post commencing treatment, and superior benefits to CSI after 6 weeks. CSI was shown to have very good short term relief however these were basically reversed after 6 weeks with very high recurrence rates leading clinicians to consider this as a treatment strategy with caution.

If you are suffering from Lateral Epicondylitis and would like it examined by one of our fully qualified therapists, please call us at Melbourne Hand Therapy today (03) 9899 8490 or leave an enquiry and we will get back to you as soon as possible.

Our goal is to assist you in achieving the best possible outcome following your injury or condition.
Get in touch with one of our therapists today!

Make an appointment Make a call