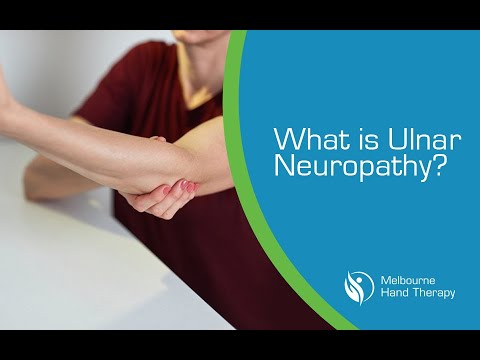 The nerve can either become irritated by stretching or pressure or by subluxating in and out of the cubital tunnel.

This is commonly caused by repetitive or sustained elbow flexion – such as with large amounts of computer use, phone use or gaming.

Pressure by leaning or resting an elbow on the table or a trauma to the area.

Often a US is utilised to investigate if the nerve is partially or fully subluxing in and out of the groove.

In more severe cases where motor changes have occured you can see an Ulnar claw which is due to the loss of lumbrical innervation leading  to unopposed FDP and FDP activation.

And Froment’s signs – which tests muscle imbalance caused by a loss of strength of adductor pollicis in ulnar innervated muscles – the far thumb is a positive sign with AP no longer assisting in holding the paper, whereas the front thumb is normal.

Additional quick tests you can perform include sustained elbow flexion, or tinel’s test which requires tapping over the nerve. With both of these tests you are looking to reproduce symptoms.

Both of the above procedures require post operative Hand therapy.